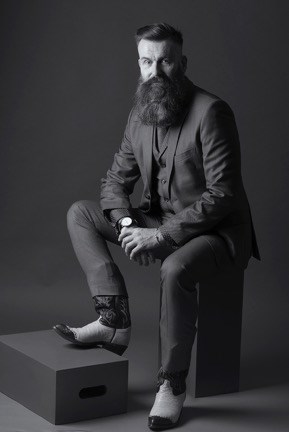 Phillip Rhodes is one of the last Australian milliners to receive traditional workroom training. After achieving a Bachelor of Arts with a major in Art History from Monash University in the early 1980s, Phillip immersed himself in the draconian world of millinery workrooms. Beavering behind the scenes in establishments in Australia and later in London, Phillip slowly learnt the exacting business of hat making that unfurled before him.

As a speaker on his specialised area of creativity, Phillip has addressed gallery openings, charity events and been interviewed on radio. His work has been exhibited at the V&A Museum and is also held in the permanent collection of the National Gallery of Victoria.

Images of Phillip’s fashion hats have been featured in Australian Vogue, Harpers Bazaar, Marie Claire and as hero shots advertising Myer, David Jones and the Victorian Racing Club. His observations about society’s changing attitudes toward hat wearing have been printed as programme notes and quoted in fashion journals and commentaries.

Phillip has taught millinery extensively throughout the last decade, in addition to eight years as a lecturer in RMIT’s Bachelor of Design (Fashion). For twenty years, he has maintained faith with his artisan craft by producing original hat ranges for major stores and boutiques, as well as individual creations for his private clientele, from his Melbourne workrooms.

In 2010, in an Australian first, Phillip and fellow milliner, Rose Hudson, created an entire suite of headwear and jewellery for Singapore Dance Theatre’s Sleeping Beauty. Phillip has previously held the position of Head Milliner with the Australian Ballet and is currently working with the Melbourne Theatre Company and Victorian Opera. He regularly judges Fashions-on-the-Field during the Melbourne Cup Carnival and the millinery for the Royal Melbourne Show.