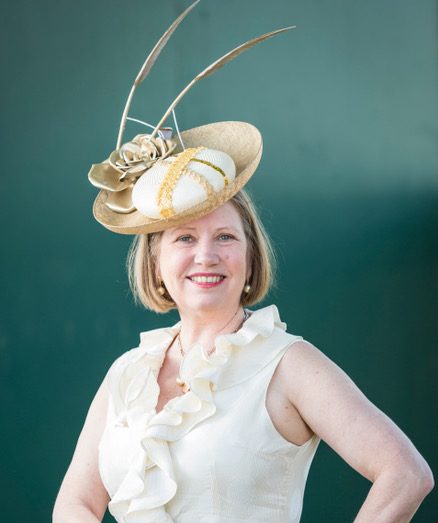 Embellish Atelier hats and headpieces have featured in magazines including Bride, Sydney Bride, Laud Magazine, The Hat Magazine and Ladies in Racing.

In 2020 Catherine celebrated 30 years of teaching at Sydney Community College.  Having learnt to sew as a young child with her mother and dressmaker grandmother she then trained and taught as a Home Economics and Textile and Design Teacher. In 2007 she made the transition to teaching millinery. She regularly teaches at schools though her classes are primarily in her studio or online.  She also tutors at events such as the Hats Off to Brisbane convention.

In 2015 Catherine established ‘Hattember’ an annual project aimed to encourage people to wear hats every day both for sun protection and style. This growing international millinery competition raises funding for her family charity – The John Skipper Kelly Fund.

In 2019 Catherine was invited to collaborate for The Hat Project with Penrith Regional Gallery bringing together the stories of the stolen generations of aboriginal women in recreating hats from old photographs.

Catherine is available for any hat related challenge in her beautiful French inspired Atelier in Rozelle, Sydney.