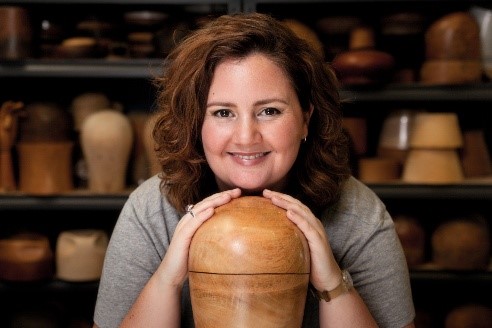 Bronwyn started making hats 20 years ago when, after receiving a grant from the Australia Council for the Arts, she began her millinery training with the renowned theatrical milliner Jean Carroll OAM.

Bronwyn’s work can be seen across theatre, film and television; most notably the stage musicals Harry Potter and the Cursed Child, Phantom of the Opera (World Tour), Love Never Dies, the Lion King and Priscilla, Queen of the Desert. TV and film credits include: The Nightingale, Gods of Egypt, The Water Diviner, A Place to Call Home, and Underbelly Razor. Bronwyn has also worked with a diverse range of Australian theatre companies including Sydney Theatre Company, Queensland Theatre Company, Bell Shakespeare and Opera Australia.

Bronwyn teaches theatrical millinery at the National Institute of Dramatic Arts (NIDA); and also at TAFE NSW Sydney Institute. She has taught workshops at the International Millinery Forum and a series of masterclasses for the Millinery Association of Australia in 2019.

In 2017 she received first place for her entry into the invitation only Masters of Millinery category at the Royal Melbourne Show.