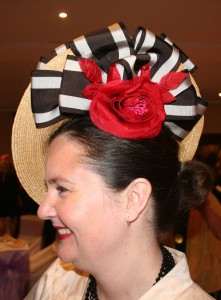 Bronwyn first started making hats in 2000 when, thanks to a grant from the Australia Council for the Arts, she began her millinery training with the renowned theatrical milliner Jean Carroll OAM.

Bronwyn’s work can be seen across theatre, film and television; most notably the stage musicals Mary Poppins, War Horse, Love Never Dies, the Lion King and Priscilla, Queen of the Desert. TV and film credits include: Gods of Egypt, The Water Diviner, Deadline Gallipoli, I Will Survive, Underbelly Squizzy and Underbelly Razor. Bronwyn has also worked with a diverse range of Australian theatre companies including Sydney Theatre Company, Bell Shakespeare, Opera Australia, Theatre of Image, Ensemble Theatre and Big hART.

She currently teaches theatrical millinery at the National Institute of Dramatic Arts (NIDA); and has previously taught Certificate 2 and 3 in Millinery, Theatrical Millinery (as part of the Theatre Costume course), and Millinery (as an advanced subject) to Floristry students at TAFE NSW Sydney Institute..

« Back to all Milliners

Find a Milliner by Location